According to Bengt Rimark, Rapid Group Marketing Manager: “The 600-Series uses the same patented technology that has already proven successful in Rapid’s 300, 400 and 500-Series, which were brought to the market in 2004. The concept is completely modular and can be tailored to any application within the plastics processing and recycling industry.”

“Open-hearted describes the machine’s ergonomic design that, during a production change for example, allows the operator to gain complete access to the rotor and cutter at the heart of the machine in just three steps and without the aid of any tools. This provides for a very rapid ‘visibly clean’ confirmation, eliminating the risk of granulate contamination after colour or material changes. The same quick access benefits maintenance work as well. In both cases it significantly reduces machine downtime and improves productivity,” says Rimark.

“And when you think that apart from initial investment, cleaning and maintenance represent the biggest cost factor over a granulators lifecycle,” he adds, “any time savings that can safely be made enhances the processors bottom line. The 600-Series can make that saving possible.”

Centrally located or beside-the-press, the 600-Series is designed for the high volume granulation of injection moulded, blow moulded or extruded plastic parts and waste, and can handle throughput up to 2.500kg/h. The series, which has a rotor diameter of 600mm, is available in 900, 1200 and even 1500mm widths. In addition, to give even greater flexibility, the machines can be equipped with Rapid’s Super Tangential Cutter House to allow the granulation of parts bigger than the rotor diameter.

Operation of the open hearted 600-Series is based on the well-established Rapid cutting technique, comprising clean, double-scissor cutting action and a constant cutting circle, to produce uniform-size granules with minimal dust. Moreover, this cutting action reduces the force needed to slice through the plastics waste and therefore gives the added benefit of reduced energy consumption.

Rapid Granulator AB, headquartered in Bredaryd, Sweden, employs 265 people, has a turnover in excess of SEK 350 million per year and exports around 95 percent of its production. Supporting its sales operations and customer base the company has five subsidiaries located in Venice, Italy; Rockford (IL), USA; Shanghai, China; Lyon, France; Kleinostheim, Germany and Beirut, Lebanon, as well as a sales office in Singapore. Further support is provided by a global network of over 90 agents and local partners. More than 70,000 granulators installed across five continents confirm the company as a world-class leader in its field. 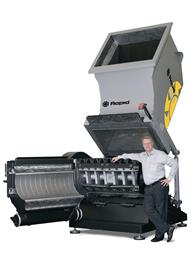 The 600-Series is the largest of Rapid’s open-hearted range of easy access granulators. These allow cleaning and maintenance time to be reduced by up to 50%, without compromising safety or regrind quality. (Photo: Rapid Granulator AB)