Bredaryd, Sweden – May 17, 2018 – At Plast 2018, leading size reduction equipment manufacturer Rapid Granulator is introducing a new range of granulators designed specifically for in-line processing of skeletal waste from sheet and film thermoforming lines. The new patent-pending ThermoPRO Series – based on an already patented Rapid design – is available in various standard and low-built formats for handling scrap widths from 600 to 1,500 mm (24-60 in.). A ThermoPRO 400-90 for granulating webs up to 900 mm in width (35 in.) will be on display at the company’s booth, B102, Pav. 15, during Plast 2018, 29 May – 1 June in Milan.

ThermoPRO machines combine features already proven on other Rapid granulators – double-scissor cutting action, an “open hearted” design for fast production changeovers and ease of maintenance, a mineral composite base for high stability and low noise, for example – with numerous new elements that were tailor-made to make thermoforming operations easier to run and more cost-effective.

“When we designed the ThermoPRO, we wanted to get inside the head of the operator to see how we could help them out and make their life easier, more controlled and more reliable,” says Bengt Rimark, Rapid’s CEO based in Bredaryd, Sweden. “That’s why we have been cooperating with some really big and demanding players in the field during development.”

“Thermoforming companies live or die according to how well they handle and recycle their trim,” Rimark notes. “Skeletal waste can easily account for up to 30 – 40% their total throughput, so it is critical that the trimmed material is returned to the process as cost-effectively as possible and with the highest quality possible. When everything works the way it should, the savings that the converter can make are enormous.”

The ThermoPRO Series has been designed to operate around the clock. “With continuously running thermoforming operations, feeding material constantly and consistently into the granulator is critical,” says Rimark. The new granulators have an integrated roller feed that was designed from the ground up as granulation is a key step in the total production process.

Operator access is another vital factor, Rimark points out. “When there is a need for a complete clean-out of the machine, for example when a new color is put through the extrusion line, it needs to be done as quickly as possible. This is the reason why we have taken our patented open-hearted engineering concept, which we originally developed for the 300, 400, 500 and 600- Series, and put it to use in the ThermoPRO as well.”

Modular construction was critical to the overall concept of the ThermoPRO, in order to make it possible to create configurations compatible with all of the many brands of thermoforming equipment currently operating in the market. “Some machines push out the skeletal waste upwards, some downwards, some even sideways,” says Rimark. “We needed to be able to adapt the overall design to fit into any of these scenarios.” He also highlights the challenge of making the equipment as compact as possible, since many thermoforming lines operate in very tight spaces.

Several special features should make ThermoPRO granulators especially attractive to thermoformers. Immediately obvious are the highly compact designs of the integrated roll feed and dancer bar. Together, these enable the skeleton to be pulled into the machine, which is running constantly, in sync with the production line, which operates discontinuously. The roller feed has a pneumatic pressure control that enables it to adapt to the thickness of the incoming material.

The ThermoPRO uses a heavy-duty roller feed as standard, enabling problem-free handling of the skeletal waste. This even makes it possible to run several webs into the granulator at the same time. It also facilitates granulation at the start-up of a thermoforming line, when the parts are not stamped out of the sheet, meaning that the entire web, trim and parts together, needs to be fed into the granulator.

A modular sound enclosure is also optional for the ThermoPRO, but Rimark says he expects a large majority of buyers to take it. “High quality sound absorption is very important, and it needs to be done in a smart way and in a way that makes the enclosure easy to clean and maintain,” he says. “This is what we have here, giving sound level less than 80 dBA with most applications.

“Noise reduction is always important in granulating equipment, but in this application, it takes on a special importance because the equipment is constantly running near where the line operator is likely to be.”

Rapid Granulator, founded 1942 with headquarter in Bredaryd, Sweden, exports around 97 percent of its production. Supporting its sales operations and global customer base the company has six subsidiaries located in: Leetsdale (PA), USA; Shanghai, China; Singapore; Venice, Italy; Lyon, France and Kleinostheim, Germany. Further support is provided by a global network of over 90 agents and local partners.

Rapid is part of LIFCO AB, a group of more than 138 companies in 29 counties. More about Lifco at www.lifco.se. 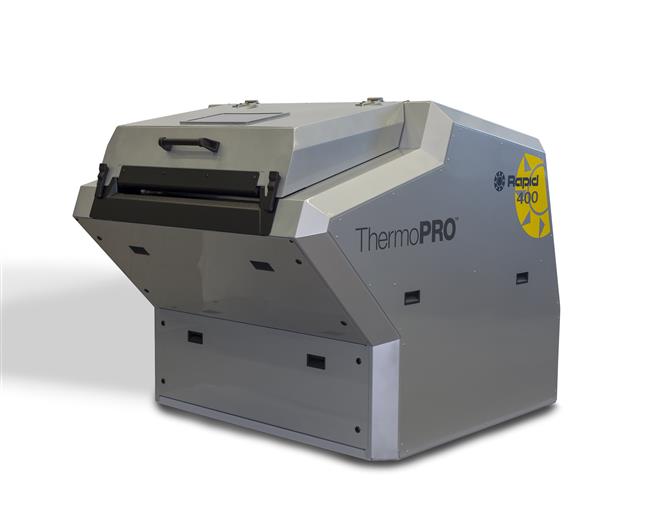 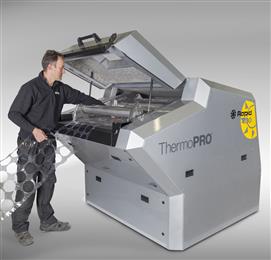