Bredaryd, Sweden – April 11, 2017 – Size reduction equipment specialist Rapid Granulator is making one of its biggest investments in decades to bring US production back under its full control. The company says this is a major move in its most important market.

Rapid will begin in-house production of its full product range of equipment for granulating and shredding plastics in Pittsburgh, PA, early in the second quarter of this year. The subject of a multi-million dollar spend by the Swedish company, the 6000-m² (65,000 ft²) facility will also include a 325-m² showroom, warehousing, and offices.

“This is an extremely important move for Rapid,” says Jim Hoffman, Vice President, Sales and Marketing, at Rapid Granulator. “In the near future, we will have full control over US production, just like we have in Sweden and just like we had here in the past. It is really important for us to have the responsibility for the quality and reliability of our equipment in our own hands.”

“We have been out-sourcing production in the US since 2008, and we have actually been very successful here—we are the market leader and 2016 was a record year for us here, just as it was globally. But we are very ambitious. The North American market right now is healthy and growing, but we want to grow even faster.”

“It is clear that there is a spirit here to favor ‘Made in America’ and we are going to do our best to give processors in the plastics industry more opportunity to do that. We are also very happy to bring new employment to the USA. We will of course be sourcing key electrical components from leading US suppliers.”

Hoffman, who has been with Rapid Granulator for 26 years, says the company is returning to its roots, 40 years after it first set up operations in the USA. “Up until 2008, we had our own production in Illinois. But then we became part of a bigger group, and production was merged with that of other group members in Pittsburgh, PA.”

Rapid was acquired by Swedish company, Lifco, just over two years ago. US production has continued uninterrupted at the previous owner’s operations, but now Rapid is taking everything back in-house. “We are passionate about our products and this passion is reinforced when you have total control of the finished product all the way through to when it is going out the door,” says Hoffman. “We are very grateful to our new owners for having the strength and confidence to make this important move, and we are going to show them that it was the right thing to do.”

The new facility, situated close to Pittsburgh airport, will have sufficient space to showcase all of Rapid’s wide range of equipment for granulation and shredding of plastics production waste and for recycling of post-consumer material. At this time, Rapid is not divulging output figures or employment numbers.

The US investment comes soon after Rapid added a major extension to test facilities at its headquarters in Bredaryd, Sweden. Both initiatives are the result of an important strategic investment made by Lifco.

Rapid Granulator, founded 1942 with headquarter in Bredaryd, Sweden, exports around 97 percent of its production. Supporting its sales operations and global customer base the company has seven subsidiaries located in: Cranberry Township (PA), USA; Shanghai, China; Singapore; Venice, Italy; Lyon, France; Kleinostheim, Germany and Sydney, Australia. Further support is provided by a global network of over 90 agents and local partners.

Rapid is part of LIFCO AB, a group of more than 100 companies in 28 counties. More about Lifco at www.lifco.se. 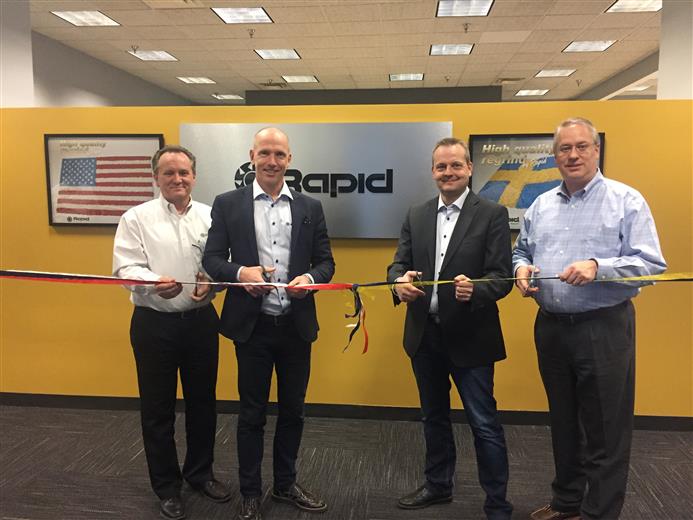