Bredaryd, Sweden - February 25, 2015 - Following the acquisition of Rapid Granulator by Lifco, customers will now - for the first time - be able to directly access a unique portfolio of granulators and shredders, as the company joins forces with sister company Eldan, which is also owned by Lifco.

Heading the two companies is Dr. Toni Reftman, who holds a Ph.D. in recycling, has been appointed to the post of CEO and Director of both companies. Dr Reftman, who was Managing Director at Eldan for the past 10 years and was previously in Business Development at Rapid for 9 years, brings a unique and unrivalled experience to this newly created post. Under his leadership, customers of the two companies will benefit from the broadest choice of solutions to meet their exact specifications.

Sweden-born Dr Reftman said: “This acquisition is an important step in the history of Rapid Granulator as it will bring together two successful companies that are able to offer a fully complementary portfolio – making us in effect the world’s largest recycling machine company in our field.”

Dr Reftman added: “Our new owner is committed to our company for the long-term bringing us back into Swedish ownership and long-term stability, enabling Rapid and Eldan to concentrate on customer service around the world.”

Further support is provided by a global network of over 90 agents and local partners. More than 100,000 machines installed across five continents, for the granulation of plastic scrap, the recycling of post-consumer and post-industrial waste, confirm the company as a world-class leader in its field.

Eldan Recycling, founded in 1965 with its head office in Faaborg, Denmark is a global supplier of recycling equipment for the of processing tyres, cables, WEEE, aluminium, refrigerators, MSW, magnesium and other waste materials. Supporting its sales operations and customer base, the company has seven subsidiaries located in Neu Lankau, Germany; Sanborn (NY) USA; Gordon, Australia; Paris, France; Harlem, The Netherlands; Pulboroughm São Paulo, Brazil as well as a network of agents around the world.

Over the past 50 years the company has installed more than 830 complete (recycling?) plants and 7,100 single machines all over the world confirming its status as a world class leader in its field 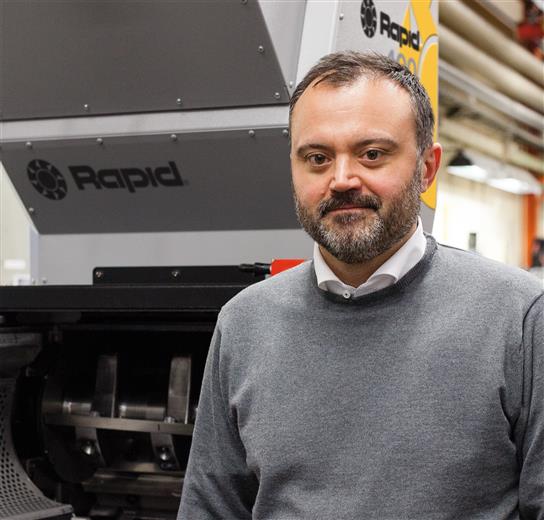 Heading the two companies is Dr. Toni Reftman, who holds a Ph.D. in recycling, has been appointed to the post of CEO and Director of both companies.
(Photo: Rapid Granulator, RAPPR039)